Monday
I spent Monday working with clients in SL as usual. However, I felt that because I need not get to meet with my Dream Team group I needed to do some work regarding communication through social media. I chose to set up a Facebook  page in the name of my Avatar. I had already set up a SL group entitled Dream Team 2 and Kautostar had joined. I began attempting to Tweet with Kauto and Autocat using #DT2 in the manner that we all Tweet with the class as a whole using #iole2. I do not know what my group members will prefer for the project. 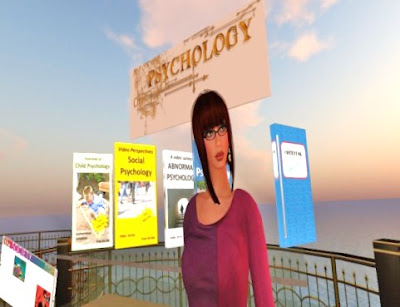 Tuesday
I received an email via the Second Life education list-serve regarding a mini-exhibition that was about to end. "Home" was created by Higher Enoch, Isis Sherryffe, RosaVioletta and Sheila Yoshikawa.
While exploring the interactive display I met Carol Rainbow, one of the owners of EduNation in SL. She teaches conversational English to air traffic controllers so that they can more accurately communicate in emergencies. It seems that their english regarding work-related topics is perfect but when a crisis happens mistakes in communication are made that have lead to fatalities. She relates that they use SL to set up scenarios or "events" to practice actual crisis that are likely to occur in flight. One such event was about a passenger having a heart attack and the staff needing to coordinate first aid in the air and emergency services when they land. She went on to say that the week following the exercise such an event actually occurred in real life and a life was saved!
Meeting her was pure happenstance but being willing to say hello netted a wonderful story and a new associate to add to my educators network in SL. We traded landmarks and general information regarding our work in and out of SL. It was really quite a pleasant conversation.

A Halloween Photohunt contest! I love my weekly photo group of people. We truly have a good time! we went to Arkhamville and did our very best to photograph the sim. SuzieQX2 Oh of the Arkhamville Builders Group was there to meet and greet us. She was very helpful to our Photohunt members. We had a brief conversation regarding my silly Halloween avatar :) and them she was on her way to mingle with the others.

Arkhamville-Once up on a time in a land not so far away, there was a village where many dark and mysterious things happened and someone was murdered.  Come solve the mystery of Arkhamville-talk to villagers, hunt for clues, explore the area.

Yet, another week has come to an end. Blogging remains very difficult due to my inablilty to use my right arm. I have tried dictating, typing with my left-hand only as well as dictating on a mobile device then emailing, cutting and pasting into the blog. Nothing is working very well but I am, for the most part enjoying myself.